John Robert Hall is a 1500 word sliver of 90's life at 7969, the late lamented trans palace in Hollywood in the late nineties and early zeroes.

Posted by Darya Teesewell at 6:26 PM No comments:

"Beyond the Candelabra" is a tour de force of acting, directing, art direction, cinematography and seamless digital effects. I remember working in Television and being looked down upon since I worked in a shabby mass entertainment art form.
I will now argue the roles are reversed.

The black t-shirt, two-day stubble iPhone crowd at the studios rejected this film's economic model, I'm sure because it's way too gay for mass consumption. Uh oh...what just happened there? Who's the dumbed-down, "safe" medium now? It's pretty hard to get a "film" made now unless there are people in tight suits blowing shit up in it.

Which brings me to the Oscars. I think I just saw five performances that would make best supporting actor, best supporting actress and best actor in any other year. Alas, this was not a real "film" even though it was shown at Cannes with glowing reviews.I would argue that the coveted, prestigious Oscar either needs to get bigger, or be delegated to a medium that is having it's lines blurred out of existence.

The majors probably not care if they ever make art again, especially since they are part of the corporate Golem now, but it's dangerous to institutionalize risk-averse film making in an industry that exploits the passions of artists.  This film was made by artists(including Jerry Weintraub, the producer) who didn't give a shit what anybody thought: they saw a good story and told it.

Douglas is fucking amazing: fearless and committed to showing us this complex egomaniac with a tender side. Damon is the same; committed and incredibly vulnerable. It's really an old-fashioned love story, and an oddly-old-fashioned movie in some ways.

Rob Lowe almost steals the movie as the reptilian plastic surgeon who lives in a drugged and drunken haze. All of the supporting cast are great; Scott Bakula, Dan Akroyd, and Paul Reiser. Debbie Reynolds was so good as Liberace's mom, I didn't know it was her until the end credits.

All of the tech credits are nearly flawless; they should just give them the Emmys now. The pieces with Liberace playing piano are so good I didn't wonder until later how they did it.

All this from a director/cinematographer who's walking away from the industry; maybe that's what the industry needs. So sad: big screen for teenage popcorn fodder, small screen for art. You heard it here, first. Maybe.

Posted by Darya Teesewell at 11:24 AM No comments:

My friend, and fierce advocate for any little boy who has ever tried on a dress, Helen Boyd, posted  the following YouTube link on her blog today.

I'm excited, because the tale of the Gay Crewes in New Orleans is not just fabulous, but it was crucial in the fight for basic human rights for all queer people; as usual, the Queens led the charge.I cannot wait to see this documentary.

Serendipitously, I also found this photo of Tennessee Williams and our delicate Prophetess, Candy Darling. They appeared together in one of Williams last plays,"Small Craft Warnings" in 1972. To call Candy a "Drag Queen" doesn't dishonor her, but it sadly under-informs the listener about who she was, and the impact she had on all of us who followed her.

Here they are, two beautiful and fragile creatures who were decades before their times, destroyed by the clumsy hands of U.S. culture.

Posted by Darya Teesewell at 6:11 PM No comments:

We lived in the white flight suburbs of the Conejo "bubble",lost our house, and now we live in "THE VALLEY".

When I was young, living in the The Valley was made to sound like a death sentence for a snotty westsider like I was.


The Valley is full of great ethnic markets, and authentic taco stands outnumber the Taco Bells and Del Tacos; you can't get Lengua or Tamarindo at Taco Bell.

I drive to work on the 118 every day, and get to pass through some of the tortured ethereal geology of the Santa Susanna pass. I pass Stoney point every day(their spelling,not mine, and there's good evidence it was named after stoners), and see rock climbers on their way in to commune with the sunrise, and the white trumpets of Datura brighten my drive for a week or two each year.

People often say they hate L.A.; I wonder if they hate the idea of L.A. more than the place. We aren't the only wicked town in a weird and beautiful place. 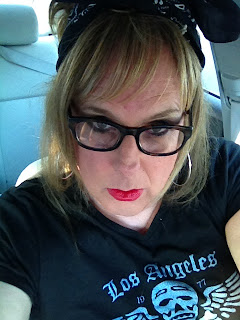 It's Blog My Face Wednesday, Bitches.

Posted by Darya Teesewell at 5:30 PM No comments:


Though I'll have some Pelligrino, thanks!!

Great articles about music, art and the fabulous writing of Frank Cotolo.All under the watchful eye of the Truly Fabulous Artist D.


My first article is an affectionate, wistful, delirious look back at one of my favorite haunts;Miss Kitty's Parlour.

Posted by Darya Teesewell at 9:02 PM No comments:

There are trans people everywhere; some out and proud, and other multitudes of us just trying to cope with it the best way we can.

High school was misery for me on more levels than you can imagine, and helped drive me into the arms of two old best friends; Cocaine and Tequila.

I went to high school reunion a few years ago,and no one remembered me: that's because I had succeeded at being invisible.

Here's a link to a really written piece about this from my friend Dana.

Dana is a lovely, calm voice in the shrill, cacophonous loop of paranoid weirdness that sometimes passes for transgender news and opinion.
Posted by Darya Teesewell at 12:59 PM No comments:

She's not going to be talking about "Transition", thank God.....

Yeah...
I didn't think the world needed another "Becoming the real me I'm supposed to be" blog bitching about the price of facial surgery. I'm a white girl, but I'm too ghetto for that.

Sounds pretty damn interesting to me, I’ll tell ya.

Blogs can be about scrapbooking, raising political hell,  living without legs or just to let everyone know that the cat barfed on the baby’s bed…again.

Mine will be about living in two genders, simultaneously, memories of stranger days, music(mostly reggae and ska) and living in the bright and guilty place known as Los Angeles. 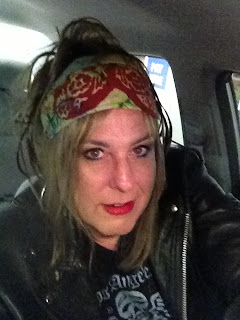 I’ll also publish the stuff I write for Fourculture Magazine here. I’m very political, but I promise  keep the volume turned down on that one, at least for now.

I'll also keep you posted if my dog barfs on anything.

Thanks for stopping by.

"Got your mother in a whirl"